Bill Cosby once said, "fatherhood is pretending the present you love most is soap-on-a-rope." Well I'm far beyond the age of making homemade cards (or soap-on-a-rope for that matter), but I'd be lying if I said that coming up with a Father's Day gift is an easy task.

I'll be honest, I actually have a hard time with both Mother's and Father's Days, not only with the gift, but the time. We live smack dab in the middle of my parents and my in-laws, an hour away from each.

To help make up for the lack of my presence today, I figure I'd share with you another of my dad's projects. If you don't remember, I introduced you to my dad in my first blog post. I even made a video about him and his classic car for our YouTube channel.


Well he's been working pretty extensively on a new project—rebuilding his 1974 International Scout II. Every time I'm over there, he waxes on poetically about that car. You'd think it was his seventh child. (He actually has five and I'd consider the Cutlass in that video his sixth.) He'll ask me if I remember certain moments or things I said while riding in the Scout—which I never do because the last time that vehicle was operational was 1993. He's told me I have to make another video about it.

So while it isn't a video, hopefully a blog post with pictures will be a pretty good gift. (Don't worry, I got him something else already too.) 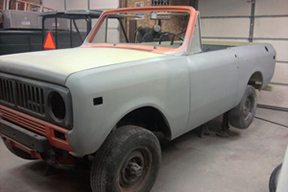 Where that vehicle began, I don't know, maybe a year ago. 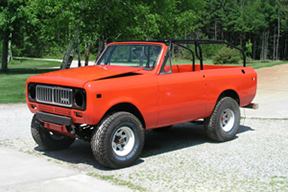 After the base coat of paint. It's quite orange, isn't it?

Where it is today, much closer to getting back on the road.

You know it's getting close when my dad calls me to ask him how he can add the vehicle to his Foremost policy. If you're in the same boat and are looking for insurance, there are plenty of Foremost agencies ready and willing to help.

My dad works a lot of weekends, but says the Scout will be rolling for the Foremost Insurance 28th Street Metro Cruise. And I don't doubt him, but with his schedule it's a good thing he's still got a couple of months to get everything worked out.

So here's to all the dads who are classic car enthusiasts. Stay safe out there and enjoy all the car shows.