A video's worth… we'll let you see for yourself. 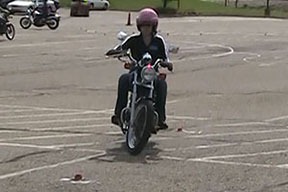 If a picture's worth a thousand words, what's a video worth? A lot of embarrassment for me.

Of course, it may not come across that way, but imagine that as you're watching it, I'm cringing right beside you. I have done video since high school and have never liked the way I appear on camera. There's a reason I'm a behind the scenes person. It's my job to make other people look and sound good. It's hard to do that when I'm not operating a camera. In most cases, the person holding the camera was RiderCoach Phil, and I do thank him and everyone else for helping me out.

Something that isn't too apparent in the video, I stalled the motorcycle…a lot. Apparently I have the same problem driving a motorcycle as I do driving a stick shift car, even though the driving is completely different. I dump the clutch too quickly and don't give it enough gas.


I also almost dropped the bike; in fact the only thing that kept me from doing it was my ankle. (Thank goodness for the sturdy, over-the-ankle boots!) Fortunately a RiderCoach was there to help me lift the bike and there's no video evidence of that happening.

After progressing through all the exercises, we had our range skills test and I'm proud to say that I passed with flying colors! What can I say; I've always had a knack for doing well on tests. (I think that stems from a fear of a failing grade.) Case in point, one of the skills we were evaluated on was performing a figure 8 inside a box. The only time I did that without putting a foot down or leaving the perimeter was on the test.

And with that my Motorcycle Safety Course experience ended. Or did it?

Stay safe on the road and on your motorcycle. Your safety is number one to us.