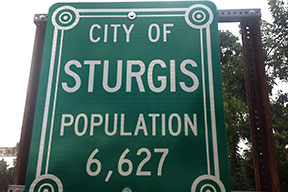 The famous motorcycle rally in Sturgis is on the horizon and approaching fast. This August the rally will be celebrating its 75th anniversary, and we can't wait to take part in the action!

In anticipation for our wild adventures in Sturgis this year, here are 6 facts you may not have known about the motorcycle rally:

Since its beginning, thousands of road warriors, free spirits and motorcycle enthusiasts from all over the world have gathered for this legendary event.